The relationship of the three phases of the COSMIC method is shown below:

In this and subsequent pages, the first use of a COSMIC keyword is given in bold.  Formal definitions of the keywords are given in Part 1 of the Measurement Manual (‘MM’) which gives the principles and rules of the COSMIC method, with many examples in Part 3 . This Introduction only has informal definitions.

It is necessary to agree and document the purpose of the measurement and various other parameters with the measurement sponsor so that in the future everyone will understand the measured size and how it may be used.

In practice only a few recurrent ‘patterns’ of parameters will be needed for the different types of software that will have to be measured in an organization. See Part 3a ‘Standard Measurement Strategy Examples’ for the most common patterns and their uses.

b) The five key strategy parameters to be determined

Documenting these parameters for each measured size will ensure that in the future the sizes will only be compared and used on a ‘like-for-like’ basis.

The term ‘layer’ is used in various ways in the software industry. (Sometimes ‘n-tier’ is used instead of ‘n-layer’.)

The figure below shows that the Application Layer may be sub-divided into other layers, dependent on the ‘view’ of the software architect (and consequently of the functional users of the software to be measured (see the following examples). 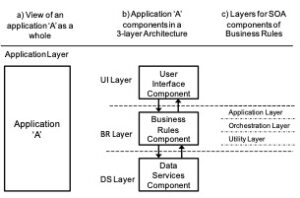 d) Before starting to measure

It’s very important to agree what artefacts of the software are available that can be used to determine the FUR to be measured. In practice the available artefacts may not supply exactly the information needed for any FSM measurement, so the measurer usually has to make some assumptions when deriving the FUR. It is best to consult an expert in the requirements of the software to be measured to help with understanding the software so that the measurement is as accurate as possible.

Some examples of the problems typically faced are:

Several COSMIC Guidelines describe how to derive or analyze FUR for different types of software or development methods. They are available for free from the Knowledge Base.

A discussion of the elements of the model and of the mapping process follows.

a) The principles of the Generic Software Model

The boundary is the interface between the software being measured and its functional user(s).

An event is ‘something that happens’. A triggering event has either happened or not happened; it cannot be sub-divided for the FUR of the software to be measured. Note that a single event might be detected by multiple functional users of the same or different pieces of software (e.g. an earthquake detected by multiple sensors); a functional user of one piece of software may detect many types of events (e.g. humans interacting with software).

c) The structure of FUR: functional processes and data movements

The Figure shows the four types of data movement and the data groups they move, their relationships with a functional process, the functional users and persistent storage:

Entries and Exits move a data group in and out of the software from/to functional users respectively.

Reads and Writes move a data group from persistent storage to the software, or vice versa, respectively.

A consequence of this concept is that if an application is measured that must store data or retrieve stored data, ignore how that data is physically processed by software in lower layers or by the hardware. Just represent FUR that require data to be stored or retrieved by Writes and Reads respectively.

Functional users interact with the software to be measured via Entries and Exits.

Any data movement moves a single data group that consists of one or more data attributes. All attributes in a data group describe the same one object of interest. An object of interest is any ‘thing’ (physical or conceptual) about which the software being measured must process or store data. If data that is moved from a functional user into the software describe two objects of interest, then identify two data groups and hence two Entry data movements. Similarly for Exits, Reads and Writes.

To help understand these concepts:

Assuming the available artefacts of the software to be measured are at the functional process level of granularity, we examine them to derive the concepts of the Generic Software Model.  The steps of this process  are:

For the last step, it may be necessary, especially for sizing business applictions, to identify the data groups that are moved in each data movement and the objects of interest that the data describe.

By the end of the Mapping phase, the measurer will have produced the concepts from the COSMIC Generic Software Model of the FUR of the piece of software to be measured. Now measure the functional size of the FUR of the software by applying the rules of the Measurement phase to this model.

The COSMIC measurement principle reads ‘the functional size of a piece of software is equal to the number of its data movements’. A COSMIC functional size is measured in the unit called ‘COSMIC Function Point’, abbreviated as ‘CFP’. 1 CFP is defined as the size of a single data movement (Entry, Exit, Read or Write).

Sizes can be measured at various levels of aggregation.

The size of required functional changes to a piece of software are measured as follows: